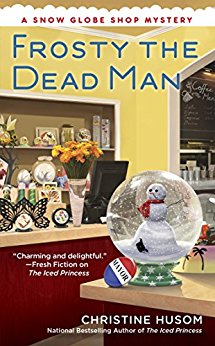 Mayor Lewis Frost has always been known as Frosty to his friends—not that he has many these days. Controversies swirling around the city council have members wondering if Frosty is trying to snow them. After one councilman storms off in a huff, the mayor turns to curio shop manager Camryn Brooks and asks her to consider taking a seat on the council.

Later, when Cami goes to his office to discuss the proposal, her blood runs cold. She finds Frosty dead, and the very snow globe she sold him earlier that day lies in sparkling shards on his carpet—along with a large diamond. Does the snow globe—which features a peculiar tableau of an armed man and three menacing bears—hold a clue to Frosty’s demise? One way or another, it’s up to Cami to shake things up before the killer’s trail goes cold…

Christine Husom is the Minnesota author of the Winnebago County Mysteries, Indigo Sea Press, and the Snow Globe Shop Mysteries, Berkley Prime Crime. She has stories in four anthologies, wrote a collaborative novel with eight authors and co-edited, A Festival of Crime for Nodin Press. She served with the Wright County Sheriff’s Department, trained with the St. Paul Police, and is currently a County Commissioner. Husom is a member of Mystery Writers of America and the National and Twin Cities Sisters in Crime. Visit Christine at www.christinehusom.webs.com

Review of Frosty the Dead Man

Review (4.5 Stars):  Frosty the Dead Man is the third book in the Snow Globe Shop series and I have to say that this is a winner.  Cami is enjoying the success of the store when Mayor Lewis Frost approaches her about taking a seat on the council.  Not sure what to do, Cami visits Mayor Frost after hours to discuss things and finds his dead body with one of her snow globes laying beside it.  Now, Cami has to solve another murder before she charged with a crime she didn’t commit.

This is such a great series and I love learning about Cami’s snow globe business.  The characters are fun and entertaining and the mystery will keep you guessing until the very end.  Such a delightful series and I can’t wait to see where it goes from here.