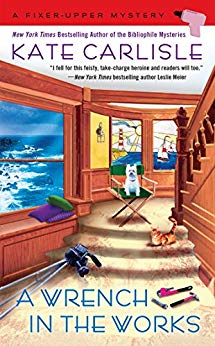 Shannon Hammer’s younger sister Chloe left Lighthouse Cove after high school to make it big in Hollywood. And she did it! For several years now, Chloe has been the co-host of a popular home repair show on the Do-It-Yourself Network. Now, after ten years, Chloe returns to Lighthouse Cove with her crew and co-host to film several shows featuring her sister Shannon, along with some special mini-segments on Victorian style and design.

But Shannon realizes quickly that things are not exactly blissful in TV land. Her sister’s handsome co-host is being stalked by someone who turns out to be his estranged wife, Erica–who also happens to be the executive producer of the show. Erica’s got a knack for stirring up sticky situations and when she’s found dead, Chloe and the entire crew are under suspicion.

Shannon soon discovers the real reason why Chloe was so eager to move away from Lighthouse Cove all those years ago. Can Shannon figure out if that ten-year-old secret is connected to Erica’s death? And can she track down the real killer before her beloved sister becomes the next victim?

Review of A Wrench in the Works

Review (5 Stars):  A Wrench in the Works is another amazing mystery from Kate Carlisle and I can’t get enough of Shannon in this series.  Shannon’s sister, Chloe, is returning to Lighthouse Cove to film her wildly popular home repair show that will feature Shannon and several of her Victorian renovation projects.  When Chloe becomes involved in a murder, it is up to Shannon to follow the clues and keep her sister from going to jail for a crime she didn’t commit.

I love this series!!  A Wrench in the Works was delightfully entertaining and I absolutely got lost in the storyline.  I loved the behind the scenes look at Chloe’s television show and an update of all the wonderful characters in Shannon’s life.  Great series and I can’t wait to read the next one!!