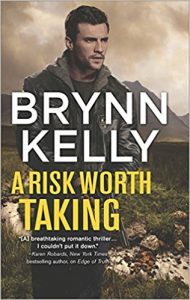 He can’t outrun himself…

Legionnaire Jamie Armstrong lives in the shadows. A medic haunted by his mistakes, he knows better than to hope for redemption. But his latest mission brings a threat he doesn’t see coming—an attraction as irresistible as it is dangerous. Hacker Samira Desta is a woman he swore to forget, but as a key witness to a deadly conspiracy, Samira is his to protect.

After a year in hiding, Samira’s worst fears come true when her cover is blown and the unlikeliest of allies comes to her aid—the secretive Scot with whom she shared one unforgettable night. Hunted by lethal forces and losing the battle against their desire, Jamie and Samira make a desperate play to take the fight to their enemy—but those at greatest risk of ruin may be themselves…

As a journalist Brynn Kelly once spent her days chasing stranger-than-fiction news reports. Now she spends them writing larger-than-life novels, in a happy bubble of fiendish plots and delicious words. A New Zealander, Brynn is an RT Reviewers’ Choice Awards nominee and a former Golden Heart® nominee, and has won the Valerie Parv Award, the Koru and the Pacific Hearts Award.

Review of A Risk Worth Taking

Review (4.5 Stars): A Risk Worth Taking was an exciting thrill-ride with intriguing characters that kept me on the edge of my seat.  Samira is on the run because she knows too much and the only person that can protect her is Jamie Armstrong, the one man she thought that she would never see again.  On a race against the clock to find evidence to bring down a deadly conspiracy, Samira and Jamie must do whatever it takes to stay alive while fighting the chemistry that has been building since their last time together. What Samira doesn’t know is that Jamie is hiding a few secrets of his own and once she finds out, it can change everything.

This was a great story and you barely had enough time to catch your breath between the non-stop action while these two characters were on the run.  Samira was used to pushing everyone away because she didn’t want them involved but she needed Jamie by her side as she dealt with this.  Jamie was such a big mystery to me because he was hiding secrets about his past before becoming a Legionnaire and you could tell that he was willing to do anything to protect Samira.

I haven’t read the other books in the series but I’m changing that today.  Ms. Kelly’s writing made this story sexy and exciting with the chemistry between these characters and its pulse-pounding action.  Can’t wait to read more from her.

One Response to “Blog Tour & Review: A Risk Worth Taking by Brynn Kelly”