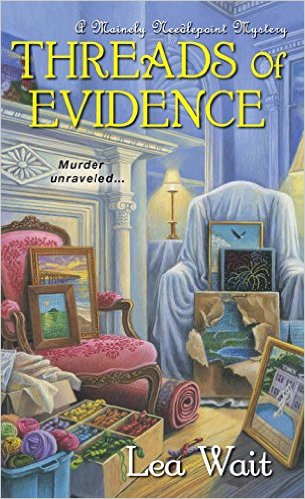 It’s hard to imagine anything bad ever happening in picturesque Haven Harbor, Maine–until a famous face rolls into town and unthreads some very dark secrets. . .

Angie Curtis and the Mainely Needlepointers are all too familiar with the Gardener estate. The crumbling Victorian mansion, known as “Aurora,” has been sitting vacant for nearly twenty-five years–and some say it’s haunted by the ghost of Jasmine Gardener, the teenage girl who died there in 1970 under mysterious circumstances…

Harbor Haven is abuzz with excitement when Hollywood actress Skye West decides to buy Aurora and sell off its furnishings. And Angie is intrigued when Skye asks her to appraise the estate’s sizable collection of needlepoint pictures. But the more she examines the pieces, the more they seem to point toward Jasmine’s murder–and the murderer–and it’s up to her to stitch the clues together. . . 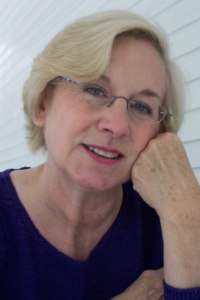 Lea Wait lives on the coast of Maine. A fourth generation antique dealer, and author of the Agatha-nominated Shadows Antique Print mystery series, she loves all things antiques and Maine, and she’s learning to do needlepoint. She also writes historical novels for young people set in (where else?) nineteenth-century Maine. Lea adopted her four daughters when she was single; she’s now the grandmother of eight, and married to artist Bob Thomas.

Review of Threads of Evidence

Review (4 Stars): This is such a great series and I absolutely adore Angie as the heroine.  Threads of Evidence was a charming and fast-paced cozy mystery that had me on the edge of my seat. This mystery was well-written and engaging, I loved figuring out the clues right along with Angie about what really happened to Jasmine.  The fun thing about this series was also learning about the different aspects of needlepoint and how this contributed to each of the mysteries.  Such a delightful cast of characters and I can’t wait to read the next book in the fun series.