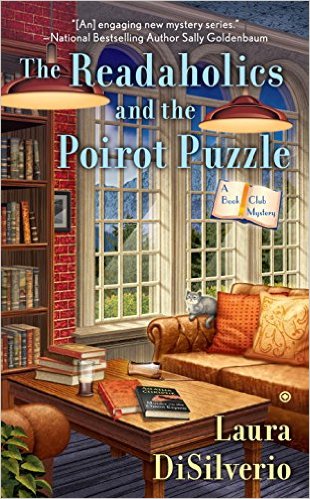 Amy-Faye Johnson’s book club, the Readaholics, is engrossed in Murder on the Orient Express, and Poirot’s surprising resolution is stirring up debate. Is the solution remotely realistic? Is justice served by Poirot’s decision? Well, the book is fiction after all…

Then, just as Amy-Faye is planning the grand opening of her brother Derek’s pub,
his hot-headed partner is murdered. To keep Derek from being railroaded as a suspect, Amy-Faye and the Readaholics take a page from Poirot and investigate. But as the clues lead to unlikely places, surprising motives, and a multitude of suspects, Amy-Faye and her pals wonder if truth can be just as strange as fiction.

My life began, from a writing perspective, when I went to college. That’s not to say I didn’t write stories before then. I did. I’ve always written and, in my elementary years, illustrated stories. My tales always featured horses and princesses I could render with flowing manes of hair. Anyway, when I say my writing life didn’t begin until college, that’s because my home life was so overwhelmingly normal and angst-free: no family divorces, no abuse, no felons, no deaths, no drugs or alcohol, no shop-lifting or sex parties to win peer approval. (Have you heard what 12-year-olds are up to today? I shudder.) My father was an Air Force pilot and we moved a lot, living in Georgia, Texas, Washington, the Philippines, and Oklahoma before I was out of high-school, but I liked the peripatetic lifestyle.

I wrote my first novel for a creative writing class at Trinity University. Professor Bob Flynn inspired me and heroically refrained from gagging when reading the contemporary romance I titled “Jeweled Torment.” That manuscript is buried in a box in the garage, along with the Regency romance I wrote shortly after joining the Air Force. I concentrated on becoming a good intelligence officer for many years before doing any more significant writing. I served with an F-16 wing in Korea, helped resolve reports of live-sightings of Vietnam prisoners of war while working out of the embassy in Bangkok, pushed paper at the Defense Intelligence Agency, earned my Master’s degree at the University of Pennsylvania, taught English for three years at the Air Force Academy, learned cool things about satellites (none of which I can ever write about) at the National Reconnaissance Office, attended various professional schools, did my time in the Pentagon, commanded a squadron in England, and ended up in Colorado. Along the way, I married my wonderful husband and produced two beautiful children who re-defined what is important in life. A moment of Holy Spirit-guided epiphany in Elliot’s Bay bookstore in Seattle convinced me it was time to embark on writing and mothering full time. I retired from the Air Force in late 2004.

My motto? Never, never, never, give up. I’m also fond of the saying that sits on my desk beneath a photo of a sailboat on the sea: “You cannot discover new worlds unless you have the courage to lose sight of the shore.”

One of those new worlds included the privilege of serving on the Sisters in Crime Board, for which I am now their immediate Past President.

I discover more new worlds all the time in my writing and I give thanks every day for being able to pursue my passion.

Review of The Readaholics and the Poirot Puzzle

Review (4.5 Stars): The Readaholics and the Poirot Puzzle is a smart, delightful and charming mystery that will keep you guessing until the very end.  Amy-Faye is helping her brother, Derek, with the grand opening festivities for his new pub when Derek’s hot-headed partner ends up dead and Derek is blamed for the crime.  To protect her brother’s good name, Amy-Faye and her fellow Readaholics start searching for clues before another victim is added to this killer’s list.

The thing I love about this series is the wonderful way they weave the mystery that they are reading into the actual storyline of this book.  Agatha Christie is one of my favorite mystery writers and I thought that this book was well-written, engaging and so fast-paced that I was swept along with Amy-Faye’s search for the killer until the very last page.  This is the second book in this fun series and I’m looking forward to Amy-Faye’s next adventure in the third installment.

I’m excited to give away a copy of The Readaholics and the Poirot Puzzle. This giveaway is for US Residents only.  To be entered in the drawing by December 10th, please leave me a comment below:

5 Responses to “Blog Tour & Giveaway: The Readaholics and the Poirot Puzzle by Laura DiSilverio”