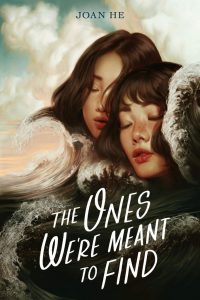 One of the most twisty, surprising, engaging page-turner YAs you’ll read this year—We Were Liars with sci-fi scope, Lost with a satisfying resolution.

Cee awoke on an abandoned island three years ago. With no idea of how she was marooned, she only has a rickety house, an old android, and a single memory: she has a sister, and Cee needs to find her.

STEM prodigy Kasey wants escape from the science and home she once trusted. The eco-city—Earth’s last unpolluted place—is meant to be sanctuary for those committed to planetary protection, but it’s populated by people willing to do anything for refuge, even lie. Now, she’ll have to decide if she’s ready to use science to help humanity, even though it failed the people who mattered most.

“Boundaries existed so that Celia could push them.”

“Her sister was alive in a world increasingly removed from life.”

Joan He was born and raised in Philadelphia but still will, on occasion, lose her way. At a young age, she received classical instruction in oil painting before discovering that storytelling was her favorite form of expression. She studied Psychology and East Asian Languages and Cultures at the University of Pennsylvania and currently writes from a desk overlooking the Delaware River. Descendant of the Crane is her debut young adult fantasy.

Review of The Ones We’re Meant to Find

Review (4 Stars): The Ones We’re Meant to Find was a great story about love and two sisters willing to do whatever it takes to be reunited. This book takes place in the future and I loved how these characters were dealing with their own issues while trying to be reunited with the other person.  I also enjoyed the mystery portion of this story as Cee was trying to piece together her memory on how she ended up on the island on the first place.  Great story and would strongly recommend that you add it to your TBR pile.