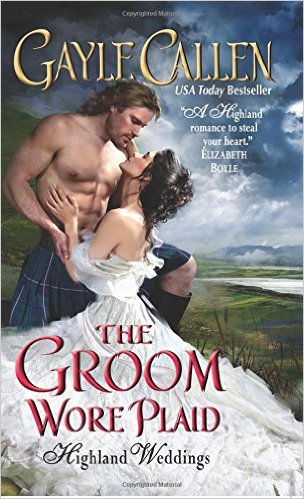 Maggie McCallum’s dreams about her new fiancé aren’t the romantic sort. It’s not just that she was bartered to Owen Duff like a piece of property to end a clan feud. She’s also haunted by premonitions of his death on their upcoming wedding day. Yet the exasperating Highlander won’t let her call it off, even though his life and his clan are both in jeopardy.

Owen has wanted Maggie in his bed since he first glimpsed her years ago. If their union restores peace between their clans, so much the better. But while lusting after another chief’s sister had its risks, growing to trust Maggie is far more dangerous. Owen is falling deeply in love with the one woman he cannot hope to claim…and survive.

After a detour through fitness instructing and computer programming, GAYLE CALLEN found the life she’d always dreamed of as a romance writer. This USA Today bestselling author has written more than twenty historical romances for Avon Books, and her novels have won the Holt Medallion, the Laurel Wreath Award, the Booksellers’ Best Award, and been translated into eleven different languages. The mother of three grown children, an avid crafter, singer, and outdoor enthusiast, Gayle lives in Central New York with her dog Uma and her husband, Jim the Romance Hero. She also writes contemporary romances as Emma Cane.
Visit her website at www.gaylecallen.com.

Review of The Groom Wore Plaid

Review (4.5 Stars):  The Groom Wore Plaid was a rich historical romance with strong characters, witty dialogue and just the right amount of paranormal suspense.  I enjoyed the chemistry between Maggie and Owen, even at the times when they were at war with one another. To me, Maggie was a great character because she was spunky, smart and wasn’t afraid to stand up for herself.  Even when people didn’t believe that she experienced visions, she knew that they were real and what the consequences would be if she didn’t try to protect the people that she cared about.

I had a hard time connecting with Owen at first because he seemed like a jerk.  He was spending too much time with Maggie in the beginning when he was promised to another, which made me angry.  This caused a lot of friction between these two characters later in the book and Owen had to make up for the things he did to Maggie in the past so they could have a more promising future.

The Groom Wore Plaid is the second book in the Highland Wedding series and I can’t wait to read more from this talented author.  You don’t have to read the first book to follow along but it might be helpful in learning the background on some of the secondary characters that are mentioned.  Looking forward to reading book three in the series.