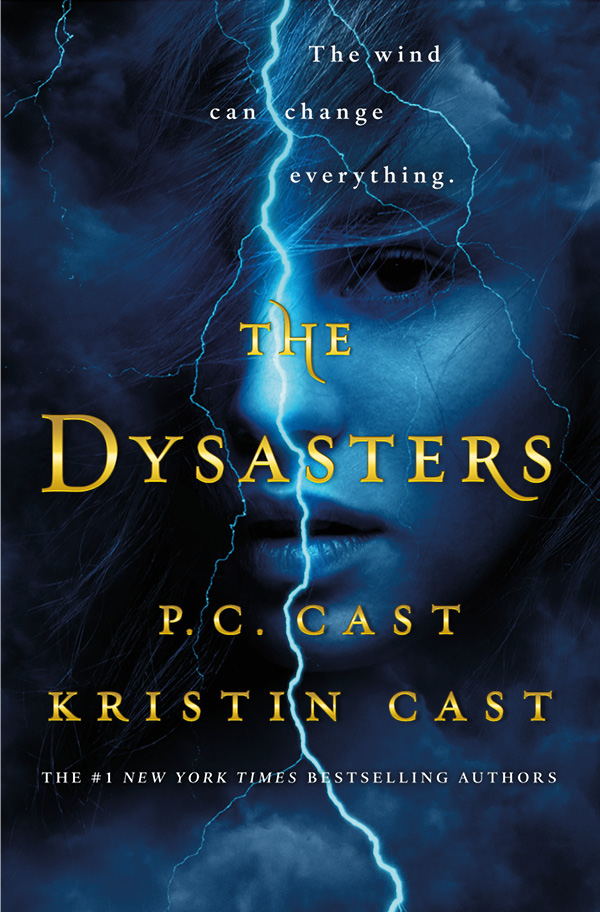 By P.C. Cast and Kristin Cast

Available in Hardcover, eBook, and Audio

P.C. and Kristin Cast, the #1 New York Times bestselling authors of the House of Night phenomenon, return to the scene with The Dysasters—the first action-packed novel in a new paranormal fantasy series.

Adoptive daughter of a gifted scientist, Foster Stewart doesn’t live a “normal” life, (not that she’d want to). But controlling cloud formations and seeing airwaves aren’t things most eighteen year olds can do.

Small town star quarterback and quintessential dreamy boy next door, Tate “Nighthawk” Taylor has never thought much about his extra abilities. Sure, his night vision comes in handy during games, but who wouldn’t want that extra edge?

From the moment Foster and Tate collide, their worlds spiral and a deadly tornado forces them to work together, fully awakening their not-so-natural ability – the power to control air.

As they each deal with the tragic loss of loved ones, they’re caught by another devastating blow – they are the first in a group of teens genetically manipulated before birth to bond with the elements, and worse… they’re being hunted.

Now, Foster and Tate must fight to control their abilities as they learn of their past, how they came to be, who’s following them, and what tomorrow will bring… more DYSASTERS?

#1 New York Times & #1 USA Today bestselling author P.C. Cast was born in the Midwest, and, after her tour in the USAF, she taught high school for 15 years before retiring to write full time. PC is a member of the Oklahoma Writers Hall of Fame. Her novels have been awarded the prestigious: Oklahoma Book Award, YALSA Quick Pick for Reluctant Readers, Romantic Times Reviewers’ Choice Award, Booksellers’ Best, and many, many more. Ms. Cast is an experienced teacher and talented speaker who lives in Oregon near her fabulous daughter, her adorable pack of dogs, her crazy Maine Coon, and a bunch of horses.

Kristin Cast is a #1 New York Times and #1 USA Today bestselling author who teams with her mother to write the wildly successful House of Night series. She has editorial credits, a thriving t-shirt line, and a passion for all things paranormal. When away from her writing desk, Kristin loves going on adventures with her friends, family, and significant other, playing with her dogs (Grace Kelly and Hobbs the Tiny Dragon), and is currently obsessed with her baby.

Review (4 Stars): The Dysasters was an amazing book and the perfect start to a new series.  Foster has the ability to control cloud formation and is on the run from some powerful people that are looking to control her abilities.  When Foster meets Tate, they discover that they have the power to control wind, which puts them on a crash course with the elements and people that will do anything to harness that power.

I was beyond excited to have the opportunity to read this book and I’m already hooked on these characters.  The ability to control the elements has always fascinated me and I immediately connected with Foster as she tried to protect her and Tate from the people that were trying to control them.  This book is fast-paced and well-written and you will get lost in this story, just like I did.  This book is the first in a new series and I can’t wait to see what happens next.

Enter for a chance to win 1 of 20 hardcover copies!  Winners will be selected at random.

Abbreviated Rules: No purchase necessary. Open only to legal residents of the 50 United States, the District of Columbia or Canada (excluding Quebec) who are age 13 years of age or older. Entry period begins at 12:00 a.m. (ET) on Sunday, February 24, 2019 and ends at 11:59 PM ET on Sunday, March 10, 2019. Void where prohibited. For full Official Rules, visit https://read.macmillan.com/promo/thedysastersblogtoursweepstakes. Sponsored by St. Martin’s Press, 175 5th Ave 10010.