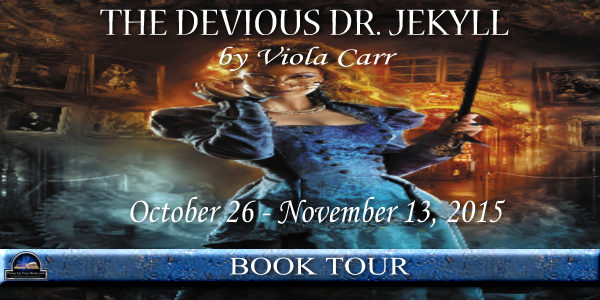 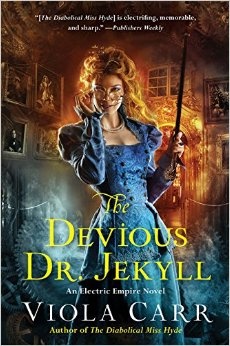 Dr. Eliza Jekyll, heroine of the electrifying The Diabolical Miss Hyde—an edgy steampunk retelling of the classic Dr. Jekyll and Mr. Hyde—investigates a bizarre murder case in an alternate Victorian London while battling her treacherous secret half: Lizzie Hyde.

Solving the infamous Chopper case has helped crime scene physician Dr. Eliza Jekyll establish her fledgling career in the chauvinistic world of Victorian law enforcement. But the scrutiny that comes with her newfound fame is unwelcome for a woman with a diabolical secret. And there is the mercurial Royal Society agent and wolf man Remy Lafayette. Does he want to marry her, eat her, or burn her at the stake? Though Eliza is uncertain about Remy, her dark and jealous shadow self, Lizzie, wants to steal the magnetic and persistent agent, and usurp Eliza’s life.

It’s impossible to push Remy away when he tempts her with the one thing she can’t resist: a bizarre crime. The search for a bloodthirsty ritual torturer dubbed the Pentacle Killer draws them into a terrifying world of spies, art thieves, and evil alchemy, where the price of immortality is madness—or damnation—and only Lizzie’s dark ingenuity can help Eliza survive.

As Eliza and Remy race to thwart a foul conspiracy involving the sorcerous French, they must also overcome a sinister enemy who is all too close: the vengeful Lizzie, determined to dispose of Eliza for good.

A Stain of Breath 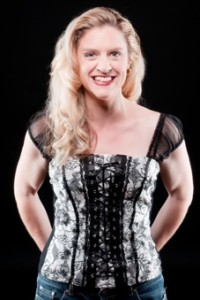 Viola Carr was born in Australia, but wandered into darkest London one foggy October evening and never found her way out. She now devours countless history books and dictates fantastical novels by gaslight, accompanied by classical music and the snoring of her slumbering cat. She loves history, and pops down to London’s many historical sites whenever she gets the chance.  She likes steampunk, and thought it would be cool to investigate wacky crimes with crazy gadgets…just so long as her heroine was the creator of said wacky gadgets: a tinkerer, edgy, with a dash of mad scientist. Readers can follow her on twitter at @viola_carr  and online at http://www.violacarr.com.

Review of The Devious Dr. Jekyll

Review (4.5 Stars): I absolutely adored Eliza Jekyll!  She was a fun, spunky and intelligent character that you will instantly like.  In this story, Eliza is asked to help solve the murders of the Pentacle Killer after the events in The Diabolical Miss Hyde and finds herself in battle with her evil side.  With Agent Remy Lafayette by her side, Eliza is in a race against time against a killer and her dark side who is planning to take over her life for good.

Ms. Carr is one of my favorite authors right now because I absolutely love her style of writing.  She has this wonderful way of grabbing hold of you with her dialogue, rich descriptions and characters that almost leap off the page.  The Devious Dr. Jekyll was a suspenseful paranormal mystery and I can’t get enough of this series.  This mystery was well-written and I’m looking forward to reading the next book that Ms. Carr puts out next.

Viola is giving away a $25 Gift Card!