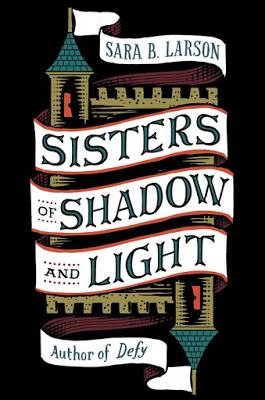 Synopsis:
From the acclaimed author of DEFY, Sara B. Larson, SISTERS OF SHADOW AND LIGHT is a timeless and fantastical tale of sisterly love and powerful magic
“The night my sister was born, the stars died and were reborn in her eyes…”.
Zuhra and Inara have grown up in the Citadel of the Paladins, an abandoned fortress where legendary, magical warriors once lived before disappearing from the world―including their Paladin father the night Inara was born.
On that same night, a massive, magical hedge grew and imprisoned them within the citadel. Inara inherited their father’s Paladin power; her eyes glow blue and she is able to make plants grow at unbelievable rates, but she has been trapped in her own mind because of a “roar” that drowns everything else out―leaving Zuhra virtually alone with their emotionally broken human mother.
For fifteen years they have lived, trapped in the citadel, with little contact from the outside world…until the day a stranger passes through the hedge, and everything changes.

Inara had retreated into herself, into the world of roaring and noise that stole her from me.

Shadows reached toward us with spectral fingers, stretching closer and closer as the light disappeared. 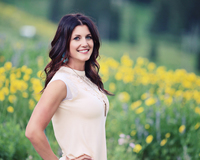 Sara B. Larson is the best-selling and critically acclaimed author of the YA fantasy DEFY trilogy (DEFY, IGNITE, and ENDURE) and the DARK BREAKS THE DAWN duology. Her next YA fantasy, SISTERS OF SHADOW AND LIGHT, comes out November 5th from Tor Teen. She can’t remember a time when she didn’t write books—although she now uses a computer instead of a Little Mermaid notebook. Sara lives in Utah with her husband, their four children, and their Maltese, Loki. She writes in brief snippets throughout the day and the quiet hours when most people are sleeping. Her husband claims she should have a degree in “the art of multitasking.” When she’s not mothering or writing, you can often find her at the gym repenting for her sugar addiction.

Review of Sisters of Shadow and Light

Review (4.5 Stars):  This is the first book in a brand new series and I’m already hooked.  Zuhara was an amazing character that would do everything for her sister, Inara.  When a young man is able to break the defenses of their home, Zuhara must make a choice. Protect the sister that she loves or be willing to give everything up for the one thing that she thought she would never have.  Love.

This book was a wonderful mixture of love, light and magic.  Zuhara had lived most of her life protecting her sister and hiding behind the walls of their home.  They weren’t able to go to the outside world because Inara would be feared due to her magical powers.  The love that Zuhara had for her sister was nothing short of amazing so when Halvor mistakenly came on the property she experienced another set of feelings that was foreign to her.  This was such an entertaining story and I can’t wait to get my hands on the second book.