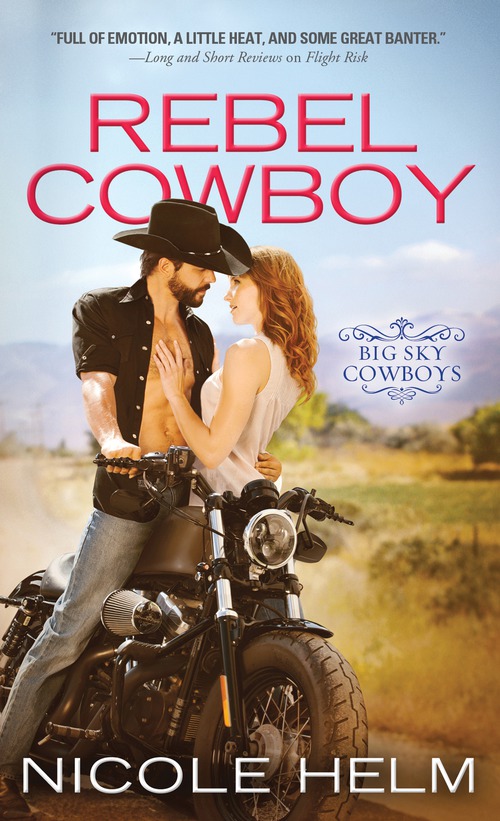 Dear Reader,
I’m so excited to introduce my upcoming cowboy series, Big Sky Cowboys, which kicks off with REBEL COWBOY this January. REBEL COWBOY is about a disgraced hockey player who decides to try and whip his grandparents’ deserted ranch into shape. When he hires a tough-as-nails local rancher to help him figure out how to do that, a local rancher who turns out to be a woman—a young, attractive woman—well, both characters get what they never expected.

I love writing about strong heroines who think they’re unbreakable and the confident, charming heroes who manage to get under all that tough exterior. Banter is one of my favorite things to write, so putting these two hard-headed people together and getting to write their arguments, their teasing, and their more vulnerable moments was so much fun.
I also love putting characters in environments where they’re way out of their element. Dan doesn’t know a thing about ranching, his entire life has been hockey. Not only did he grow up playing it, but his father was a Hall of Fame NHL star and now works in the front office of an NHL team. Living in a city and playing hockey are literally all Dan has ever known. All he knows about Montana and this ranch is that his grandfather loved it, and being isolated in Montana will keep him out of the press while his agent works to find him a new team. So, being in this completely new environment means Dan makes some pretty amusing missteps along the way.

And Mel, well, she might be a ranching expert, but a handsome man with charm to spare is something she’s never had to face before. Not only has her life been pretty isolated on her family’s Montana ranch with only her father and brother, but her one and only relationship was for convenience rather than passion. So, she doesn’t know what to do with Dan’s flirting, except fight it. Well… at first anyway. Add to that, Mel has a lot of baggage that makes it really hard for her to open up and trust.

These two certainly have their work cut out for them to make it to their happily ever after!
One of my favorite parts about writing REBEL COWBOY are the scenes with the mystery llama. Yes, a llama. I can’t even really explain how that happened. I just thought, wouldn’t it be funny if Dan had to deal with something really unexpected… like a mystery llama? (One too many viewings of Napoleon Dynamite may have had something to do with this). How Dan deals with Mystery (the llama) and how Mel deals with Dan dealing with the llama, well, it definitely gave me a few laughs while writing.

Aside from llamas and the romance between these two polar opposites, I wanted to tell a story about a broken family, who slowly learn how to heal. Mel is the first step in the Shaw family’s healing, and the remaining two books in the series—OUTLAW COWBOY (May), and TRUE-BLUE COWBOY (2017)—will continue to deliver that happy ending, not just to each sibling, but to the entire Shaw family.

I hope you’ll consider a trip to Blue Valley, Montana and enjoy some Big Sky Cowboys! 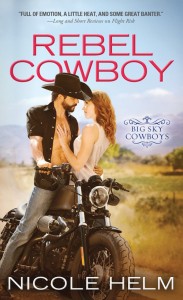 UNDER A BIG SKY
For hotshot NHL star Dan Sharpe, hockey isn’t just his job—it’s his everything. But when claims of cheating get him bounced from the ice, he finds himself feeling lost. Everyone thinks he’s crazy for taking on his grandfather’s ramshackle Montana ranch, but hey, he’s Dan Sharpe: how hard can it be?

As it turns out?Plenty hard.

Mel Shaw has been fighting tooth and nail to keep her family from falling apart. The last thing she needs is a distraction, but taking a job as some city slicker’s consultant may be her only chance to save the land she loves. But she never expected someone like Dan to come roaring into her life, and it doesn’t take long for Mel to realize this hockey-star-turned-cowboy has the power to upend her carefully ordered world—and heart—for good.

Nicole Helm writes down-to-earth contemporary romance specializing in people who don’t live close enough to neighbors for them to be a problem. When she’s not writing, she spends her time dreaming about someday owning a barn. She lives with her husband and two young sons in O’Fallon, Missouri.