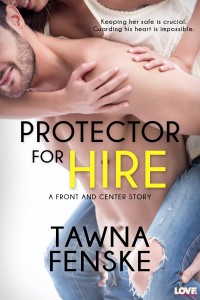 Haunted by his time in Iraq, former soldier Schwartz Patton goes off the grid, retreating deep into Montana’s untamed wilderness. Now, ten years into his self-imposed solitude, his brother tracks him down and asks for a favor. A woman is in danger, and she needs help…and Schwartz is the only one who can protect her.

Designer-loving city girls like Janelle Keebler don’t belong in the wilderness. Unless, of course, they’re witnesses to a murder by their psycho drug-trafficking ex-husbands. Still, Janelle can’t help the immediate physical response she has to her sexy-as-sin protector that leaves her wanting more than she could have ever imagined. Even if he does make terrible coffee…

Every word, every touch, every kiss ignites a need Schwartz thought he’d lost forever. He can’t stop the desperate attraction simmering between him and Janelle, even if he wanted to. Even if it means it could get them both killed.

“You saw something brutal and bloody and awful,” Schwartz murmured. “That sort of thing can mess with your head.”
He spoke like a man intimately familiar with the experience, and Janelle wanted to ask how he knew. But something told her not to. She might be lying half clad in his bed, but he was still a stranger.
A stranger who felt really, really warm.
She sighed, enjoying the heat seeping from his palm through the thin cotton of her cami top and the elastic waist of her satin sleep shorts. “I thought I was doing okay, you know?” she whispered. “I mean, I’m safe here, right?”
“Right.”
“So why do I feel like a scared little girl?”
His palm curled tighter around her waist. In the darkness, the lines in his face shifted to something resembling a grimace. “You most definitely do not feel like a little girl.”
She laughed, snuggling closer to all that heat and strength. “Thanks. I think.”
Her shifting under the covers made his palm drop from her hip to the small of her back. She might have been imagining things, but she could have sworn she felt his fingertips stroke the top of her sleep shorts, dipping ever so lightly under the waistband. Probably shouldn’t read too much into that.
She wasn’t sure what to do with her hands, and found herself awkwardly folding them against her chest. That felt weird. She unclasped her fingers, hesitating.
To touch or not to touch?
Touch.
She slid her hands forward a few inches to splay them across his chest. He stiffened at first, then relaxed beneath her fingertips.
Better. Much better.
He wore no shirt, and there was a soft dusting of fur across his chest. His muscles were taut and massive beneath her palms, and he didn’t move to push her hands away. Good
Lord, what did this guy do for exercise? Wrestle bears? Bench-press fallen trees? Do bicep curls with boulders?
She tipped her head back to look at him, and found him studying her with an expression of frank interest. “What?”
“I sleep alone. Always. This—this is new.”
She bit her lip. “I can leave if you want.”
“It’s okay. You can stay for a minute. You’re still shaking.”
She was, but it had nothing to do with fear anymore.
She hesitated, wondering how rude it might be to ask the question that was on her mind. It was probably much too intimate.
You just crawled into bed with him. That’s not intimate?
“Schwartz?”
“Yeah?”
“You said you sleep alone. And you’re way out here in the middle of nowhere. I was just wondering—”
“If Sherman starts to look sexy to me every now and then?”
“What?” She laughed and swatted his chest. “No, that’s not what I meant. Well, not exactly.”
“You’re wondering if I’ve taken a vow of celibacy out here in the Montana wilderness.”
“Well, yeah. Kinda. If it’s too personal, you don’t have to answer.”
“Honey, you’ve been rubbing your thigh on my hard-on for the last five minutes. I think we’re past the point of personal.”
She gasped and started to pull back, mortified. “I thought that was your hip bone. Oh my God, I’m so sorry.”
“Don’t be. This is the most action I’ve seen since the night Sherman and I—”
“Okay, okay, stop. Anyone ever tell you you’re crude?”
He grinned. “Nope. The benefit of living alone.” 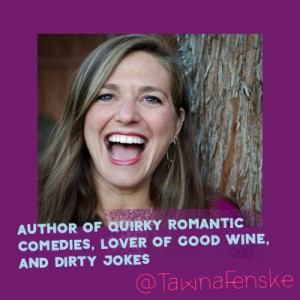 Tawna Fenske is a romantic comedy author who writes humorous fiction, risqué romance, and heartwarming love stories with a quirky twist. Her offbeat brand of romance has been praised by Booklist as “A tame Carl Hiaasen on cupid juice,” and RT Book Reviews nominated her debut novel for contemporary romance of the year. Tawna is a fourth generation Oregonian who can peel a banana with her toes and who loses an average of 20 pairs of eyeglasses per year. She lives in Bend, Oregon with her husband, step kids, and a menagerie of ill-behaved pets.

Review of Protector For Hire

Review (4 Stars):  I loved Janelle and Schwartz’s story!  These two characters had great chemistry together and I enjoyed how Schwartz and Janelle tried to pretend that nothing was happening when you could see their attraction to one another. Janelle was a great spunky heroine who was afraid to make another mistake by trusting the wrong person and Schwartz had been hiding from others and his life for way too long. If I was ever in trouble, I would definitely want Schwartz to be the one to protect me because he was a force to be reckoned with.

Protector For Hire was a sexy, smart romance that is sure to entertain readers.  I loved the humor and witty banter that was laced throughout this story and I can’t wait to catch up with the rest of the series.  This is the fourth book in the Front and Center series and even though I’m new to series, I’m looking forward to spending more time with the Patton brothers.