I am thrilled to be hosting a spot on the INTO THE DARK by Claudia Gray Blog Tour hosted by Rockstar Book Tours. Check out my post and make sure to enter the giveaway! 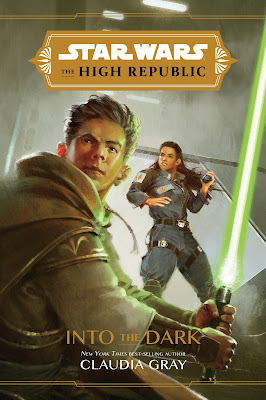 Long before the Clone Wars, the Empire, or the First
Order, the Jedi lit the way for the galaxy in a golden age known as the High Republic!

Not everyone who hears the call to adventure wants to answer it….

Jedi Padawan Reath Silas loves adventure—reading about it, that is, not living it. Content to spend hours browsing the Jedi Archives on Coruscant, Reath dreams of being one of the great scholars of the Jedi Order. But Reath’s master, the well-respected and virtuous Jora Malli, has other plans: she’s taken a post at Starlight Beacon, the Republic’s shining new outpost on the edge of known space. As her Padawan, Reath must join her, whether he likes the idea or not. (And he most definitely does not.)

So Reath reluctantly boards the ship that will take him and a few other Jedi to the dedication of Starlight Beacon, where Master Jora waits for him to start their new adventurous life on the frontier. But trouble in hyperspace leaves the ship and other nearby vessels stranded, with only an eerie abandoned space station reachable for shelter. And the secrets hidden there will not only bring Reath to a crossroads but, if left unchecked, could plunge the entire galaxy into darkness….

The station atrium echoed with shouts, bellows, and the clanging of metal. Master Cohmac nodded quickly as he righted himself. “Orla, are you able to fight?”
Her hand went to the lightsaber at her belt. “Always.”
Master Cohmac glanced at Reath, who gave him a quick nod. Then the four of them rushed back into the station. “Orla, take these,” Master Cohmac called, pointing at the second level up. “I’ll clear the top levels. Dez, head to the far side of the station and see what’s happening there. Reath, guard the airlocks.”
Reath nodded. Orla and Master Cohmac jumped at the same instant, both of them soaring meters high. Reath didn’t watch them any longer than that. Instead he ignited his lightsaber. It had been a while since he’d felt its hum, since its cool green light had bathed him in its glow.
But for someone who considered himself much more scholar than fighter, it felt surprisingly good to have the lightsaber in hand again.
A shriek drew his attention to a struggle taking place near another entrance to the airlock ring. Reath’s eyes widened as he saw Nan in the grip of an enormous human man.
Her arms were pinned to her sides, and though she thrashed her head from side to side, it was impossible for her to escape. She looked more furious than frightened, though she had to be terrified.
“Hague!” Nan cried out. “Hague, help!”
She had no one she trusted in the whole galaxy to take care of her except one elderly man. Reath didn’t doubt that Hague would hobble out there ready to pummel her kid-napper with his cane. Nor did he doubt that Hague would quickly be beaten or killed for his trouble.
Reath ran several steps toward them, then jumped. His leap took him five meters over the grass, through vines that smacked against his limbs, to a point directly in front of Nan and her would-be abductor. Both of them looked equally astonished to see him.
Another human, one wearing a red scarf, swaggered up behind him. “You here to tell us we’re not being orderly?” he said in a mocking voice. “No law in these parts yet, little boy. That means we can take as much off this station as we can carry. And we can carry her just fine.”
Nan’s eyes were wide. “Reath—what are you—” She lost her breath and could only stare at the lightsaber in disbelief.
He ran the scenarios in his head. There weren’t many. All of them were more violent than he would prefer.
Reath said evenly, “Put her down and walk away, or I’ll be forced to take action.”
“What, you think you can take both of us out with your little twinkle sword?” sneered the thug still clutching Nan in a death grip. “Looks like a toy.”
“It’s not,” Reath said quietly, putting power and intent into his words. “Put her down and walk away.”
But, like all his other attempts so far at using the Force to change minds, this failed. The red-scarved man swaggered forward, hands on his hips. “Do your worst, little boy.”
Never before had Reath been in this position—where he would have to be the first to take action, to do harm. He’d always wondered if he would hesitate. If he’d doubt himself.
When it came to saving a life, however, there could be no hesitation.
Instead Reath said, “I understand prosthetic arms are more advanced than prosthetic legs. More comfortable, too.”
No flicker of understanding showed in the man’s face, not until the moment after Reath’s lightsaber had swept through his arm, severing it at the elbow. A forearm tumbled down onto the ground. The red-scarved man’s expression shifted from smugness to disbelief, then crumpled into a grimace as his shocked nerve endings finally broadcast pain.
Immediately the bigger guy dropped Nan and ran into the shadowy jungle surrounding them. Nan put her hand to her mouth as she stared at the abandoned forearm. Reath said, “I have to stand guard at the airlocks. Come with me.”
The red-scarved man finally fell to his knees and howled. “What have you done to me?”
Reath holstered his lightsaber. “We’ll give you a full medical checkup as soon as the situation calms down.”
With that he pulled Nan against his side. He wasn’t sure how to balance himself for the leap while carrying someone else, so he recalculated swiftly. “Hang on.”
Her arms went around his neck. Reath jumped forward and upward in a sharp arc—until his free hand clutched one of the longest vines. Their momentum and weight did the rest, sending them swinging in a long curve back to the airlock ring.
No sooner had they landed than Nan dashed toward the lock where her ship, and Hague, awaited. Of course she’d want to find her guardian. But she glanced back over her shoulder and called out, “Thanks!”
Reath managed a brief smile for her before he took up his lightsaber again.

The Orincans leveled their blasters at Cohmac as he leapt onto their deck of the station. Magnetically sealed? he wondered of the station. Possibly.
The blue blade of his lightsaber ignited, its gleam slicing through the murky dark. As the Orincans fired, he spun his saber, expertly deflecting the beams into the trunks of the larger trees that could bear it, or into some of the boxes and trunks of abandoned cargo. None hit the walls, which was his main objective.
Squealing in consternation, the Orincans beat a hasty retreat. He glanced down just in time to see Orla hold out her lightsaber and ignite it—two blades, shining white, piercing the shadows. The Mizi began backing off immediately. But it was too easy for the looters to escape; the layout of the station meant he and Orla would literally be running in circles trying to pursue them all.
The Vessel lacked the military heft to forcibly stop the looters from leaving with their ill-gotten gains. Therefore, stopping the ransacking would have to be accomplished through more than sheer strength. Reason and persuasion hadn’t worked, either.
Time for awe.
Cohmac climbed the rungs of the atrium railing. His eyes detected Affie Hollow cleverly concealed behind a greenery-overgrown barrier, but that hardly mattered—except that this girl, too, would finally learn what the Jedi truly were.
He focused his energy and drew upon the Force. Though darkness surrounded him, the sheer vitality of the living things on the station worked on Cohmac like fuel. Strength flooded his body, and ultimate clarity sharpened his mind.
With that, he jumped.
Affie screamed, but the sound flowed past Cohmac, just one more aspect of the illusion-reality around him. Reaching out with the Force, he sensed the atrium floor and balanced himself above it. Eight meters above it.
Levitation was a complex art. The more academic Masters bickered over the reasons why it should be more difficult for Jedi Knights to lift and steady themselves than any other object. Cohmac considered the discussion academic to the point of esoteric; besides, this was a skill that, for him, came naturally.
As he floated in the center of the atrium, he held his lightsaber above his head. Its blue glow flickered against the exposed slivers of metal as though igniting dozens of small flames. He called out, “Hear me!”
His voice echoed throughout the atrium, as Cohmac had calculated it would. The sounds of combat slowed, then silenced. Faces of many species stared out, weapons at their sides, slack in astonishment at seeing a human male airborne, held aloft by no power but his own.
Really, it was among the least significant of a Jedi’s abilities. But it made people pay attention and earned their respect, which was all Cohmac required at the moment.
“In the name of the Republic, I command you to cease looting and thievery aboard this station immediately.” Cohmac’s resonant voice filled the entire vast space, reaching every antenna and ear. “Within fifteen minutes, every captain of every ship now docked here must have done one of two things: packed up their crew and left, or prepared them-selves to peaceably cooperate. You accept the authority of the Republic’s laws and stay, or you reject it and leave. It doesn’t matter which. But choose one, now—or we will be forced to make that choice for you.”
Nobody hurried to leave. Instead, many of the groups collected themselves, put down the finds they’d stolen, and began shuffling back toward the airlock level. They’d be ready to negotiate. He and the other Jedi would have a chance to discuss the strange phenomenon emanating from the idols, so strongly linked to the dark side.
But Cohmac didn’t fool himself that he’d achieved any-thing more than a temporary reprieve. As he descended through the air, robe rippling around him, he knew this fragile peace would not last long. 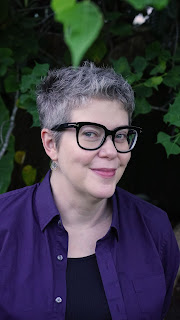 Claudia Gray is the author of Star Wars: Bloodline, Star Wars: Lost Stars, Star Wars: Leia, Princess of Alderaan, and Defy the Stars, as well as the Firebird series, the Evernight series and the Spellcaster series.
She has worked as a lawyer, a journalist, a disc jockery, and a particularly ineffective waitress. Her lifelong interests include old houses, classic movies, vintage style, and history. She lives in New Orleans. Find her at claudiagray.com, facebook.com/authorclaudiagray, and @claudiagray.

3 winners will receive a signed finished copy of INTO THE DARK, US Only.