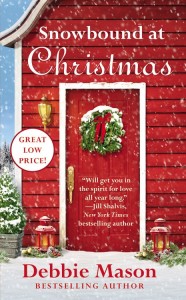 Ex-cop Cat O’Connor is bored working for her sister, Chloe, as a personal assistant on the set of her soap opera. Until Chloe gets an opportunity to audition for the role of a lifetime and asks her identical twin to substitute for her on the soap with no one the wiser. It’s a perfect switch-until Cat attracts the attention of the mysterious Mr. Tall, Dark, and Way-too-handsome leading man.

Grayson Alexander never thought being snowbound in the charming town of Christmas, Colorado, for the holiday would get so hot. But between working with sexy, tough Cat on set and keeping his real reason for being there under wraps, he’s definitely feeling the heat. And if there’s one thing they’ll learn as they bring out the mistletoe, it’s that in this town, true love is always in season.

Amazon/B&N
About the Author:
Debbie Mason is the bestselling author of the Christmas, Colorado series. Her books have been praised for their “likable characters, clever dialogue and juicy plots” (RT Book Reviews). She also writes historical paranormals as Debbie Mazzuca. Her MacLeod series has received several nominations for best paranormal as well as a Holt Medallion Award of Merit. When she isn’t writing or reading, Debbie enjoys spending time with her very own real-life hero, their four wonderful children, an adorable grandbaby, and a yappy Yorkie named Bella.
Website/Twitter/Facebook 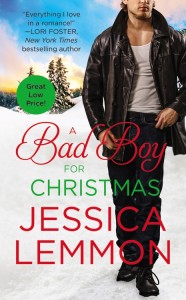 Connor McClain knows what he wants. And after four harrowing years in Afghanistan, that’s a quiet life in the lakeside town of Evergreen Cove. But coming home has land mines of its own-the most dangerous of them being long-legged bombshell Faith Garrett. Now getting her into his arms this holiday is going to require more than mistletoe . . .

With a cheating ex behind her, all Faith wants is a relaxing holiday free from man drama. And even though every moment with gorgeous Connor is a sweet temptation, Faith is determined not to give in. But Jack Frost has other plans, and soon Faith and Connor are snowbound in a winter wonderland with only the sparks flying between them to keep them warm. As one hot kiss leads to another, they’ll have to decide if they’re ready to give each other the best gift of all-love.

Amazon/B&N
About the Author:
Jessica Lemmon has always been a dreamer. At some point, she decided head-in-the-clouds thinking was childish, went out, and got herself a job . . . and then she got another one because that one was lousy. And when that one stopped being fulfilling, she went out and got another . . . and another. Soon it became apparent she’d only be truly happy doing what she loved. And since “eating potato chips” isn’t a viable career, she opted to become a writer. With fire in her heart, she dusted off a book she’d started years prior, finished it, and submitted it. It may have been the worst book ever, but it didn’t stop her from writing another one. Now she has several books finished, several more started, and even more marinating in her brain (which currently resides in the clouds, thankyouverymuch), and she couldn’t be happier. She firmly believes God gifts us with talents for a purpose, and with His help, you can create the life you want. (While eating potato chips.)
Website/Twitter/Facebook 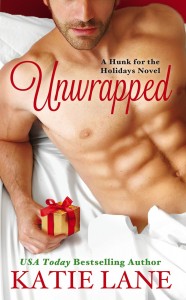 Jacqueline Maguire has a problem tying the knot.After fleeing the altar (again), the runaway bride drives off with no particular destination in mind. Which is how Jac finds herself stranded in a snowstorm with a hot, hard-bodied stranger who treats her to the naughtiest night of her life . . . but come morning, he’s long gone.

Contractor Patrick McPherson is deeply committed to his bachelor lifestyle. No strings, no rings. As the Christmas season approaches, however, Patrick still can’t quite forget his curvalicious one-night stand. Then Jac shows up unexpectedly, and all holiday hell breaks loose. Because this year, Patrick is getting the biggest Christmas surprise of his life.

Amazon/B&N
About the Author:
Katie Lane is the USA Today bestselling author of the Deep in the Heart of Texas and Hunk for the Holidays series. Katie lives in Albuquerque, New Mexico, and when she isn’t writing, she enjoys reading, traveling, and cuddling with her high school sweetheart and cairn terrier Roo.
Website/Twitter/Facebook