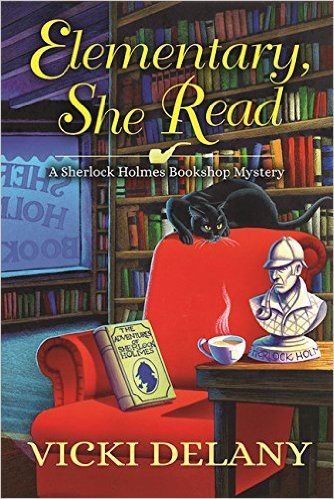 Gemma Doyle, a transplanted Englishwoman, has returned to the quaint town of West London on Cape Cod to manage her Great Uncle Arthur’s Sherlock Holmes Bookshop and Emporium. The shop–located at 222 Baker Street–specializes in the Holmes canon and pastiche, and is also the home of Moriarty the cat. When Gemma finds a rare and potentially valuable magazine containing the first Sherlock Homes story hidden in the bookshop, she and her friend Jayne (who runs the adjoining Mrs. Hudson’s Tea Room) set off to find the owner, only to stumble upon a dead body.

The highly perceptive Gemma is the police’s first suspect, so she puts her consummate powers of deduction to work to clear her name, investigating a handsome rare books expert, the dead woman’s suspiciously unmoved son, and a whole family of greedy characters desperate to cash in on their inheritance. But when Gemma and Jayne accidentally place themselves at a second murder scene, it’s a race to uncover the truth before the detectives lock them up for good. 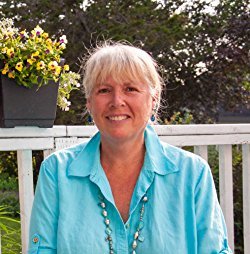 is one of Canada’s most prolific and varied crime writers. She is the author of twenty-three published crime novels, including standalone Gothic thrillers, the Constable Molly Smith series, and the Year Round Christmas Mysteries.  Under the pen name of Eva Gates

she is the national bestselling author of the Lighthouse Library cozy series.

, will be released in March 2017 from Crooked Lane Books.

Vicki lives and writes in Prince Edward County, Ontario. She is the past president of the Crime Writers of Canada.

Review of Elementary She Read

Review (4.5 Stars): Elementary She Read was a charming who-dunnit with delightful characters and a well-written storyline.  Gemma has returned home to manage her Great Uncle’s bookstore that specializes in Sherlock Holmes books and artifacts only to stumble upon a dead body while locating the owner of the first story that featured the great detective.  I immediately connected to Gemma in this story and this mystery kept me entertained until the very last page.  If you are a fan of Sherlock Holmes, this is definitely the perfect mystery series for you.

This is the first book in the new Sherlock Holmes Bookshop series and Ms. Delany has a winner on her hands.  I can’t wait to read more adventures of Gemma and Moriarity in the future and I know they will be just as fun as this one.