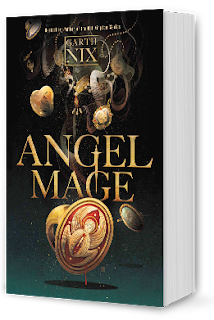 More than a century has passed since Liliath crept into the empty sarcophagus of Saint Marguerite, fleeing the Fall of Ystara. But she emerges from her magical sleep still beautiful, looking no more than nineteen, and once again renews her single-minded quest to be united with her lover, Palleniel, the archangel of Ystara.

A seemingly impossible quest, but Liliath is one of the greatest practitioners of angelic magic to have ever lived, summoning angels and forcing them to do her bidding.

Liliath knew that most of the inhabitants of Ystara died from the Ash Blood plague or were transformed into beastlings, and she herself led the survivors who fled into neighboring Sarance. Now she learns that angels shun the Ystaran’s descendants. If they are touched by angelic magic, their blood will turn to ash. They are known as Refusers, and can only live the most lowly lives.

But Liliath cares nothing for the descendants of her people, save how they can serve her. It is four young Sarancians who hold her interest: Simeon, a studious doctor-in-training; Henri, a dedicated fortune hunter; Agnez, an adventurous musketeer cadet; and Dorotea, an icon-maker and scholar of angelic magic. They are the key to her quest.

The four feel a strange kinship from the moment they meet, but do not know why, or suspect their importance. All become pawns in Liliath’s grand scheme to fulfill her destiny and be united with the love of her life. No matter the cost to everyone else. . .

I think the neighboring Archangels have acted to limit the Ash Blood and the creatures it brings, as best they can, in the earthly realms they protect.

She had a light in her eyes, a madness

Garth Nix has been a full-time writer since 2001, but has also worked as a literary agent, marketing consultant, book editor, book publicist, book sales representative, bookseller, and as a part-time soldier in the Australian Army Reserve.

Garth’s books include the Old Kingdom fantasy series, comprising Sabriel, Lirael; Abhorsen; Clariel and Goldenhand; SF novels Shade’s Children and A Confusion of Princes; and a Regency romance with magic, Newt’s Emerald. His novels for children include The Ragwitch; the six books of The Seventh Tower sequence; The Keys to the Kingdom series and others. He has co-written several books with Sean Williams, including the Troubletwisters series; Spirit Animals Book Three: Blood Ties; Have Sword, Will Travel; and the forthcoming sequel Let Sleeping Dragons Lie. A contributor to many anthologies and magazines, Garth’s selected short fiction has been collected in Across the Wall and To Hold the Bridge.

More than five million copies of his books have been sold around the world, they have appeared on the bestseller lists of The New York Times, Publishers Weekly and USA Today and his work has been translated into 42 languages. His most recent book is Frogkisser! now being developed as a film by Twentieth Century Fox/Blue Sky Animation.

Review (4 Stars):  I love stories that deal with monsters and hidden secrets, so for me, Angel Mage definitely fits the bill.  The characters are entertaining and the story have enough twists and turns to keep any reader guessing.  I couldn’t get enough of this story and was lost in its magical writing.  So excited to see what this author puts out next.