After unwittingly helping her mother poison King Louis XIV, seventeen-year-old alchemist Mirabelle Monvoisin is forced to see her mother’s Shadow Society in a horrifying new light: they’re not heroes of the people, as they’ve always claimed to be, but murderers. Herself included. Mira tries to ease her guilt by brewing helpful curatives, but her hunger tonics and headache remedies cannot right past wrongs or save the dissenters her mother vows to purge.

Royal bastard Josse de Bourbon is more kitchen boy than fils de France. But when the Shadow Society assassinates the Sun King and half the royal court, he must become the prince he was never meant to be in order to save his injured sisters and the petulant Dauphin. Forced to hide in the derelict sewers beneath the city, any hope of reclaiming Paris seems impossible—until Josse’s path collides with Mirabelle’s, and he finds a surprising ally in his sworn enemy.

She’s a deadly poisoner. He’s a bastard prince. Together, they form a tenuous pact to unite the commoners and former nobility against the Shadow Society. But can a rebellion built on mistrust ever hope to succeed? 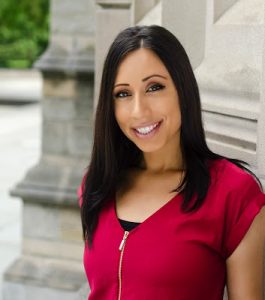 Addie Thorley spent her childhood playing soccer, riding horses, and scribbling stories. After graduating from the University of Utah with a degree in journalism, she decided “hard news” didn’t contain enough magic and kissing, so she flung herself into the land of fiction and never looked back.

She now lives in Princeton, New Jersey with her husband, daughter, and wolf dog. When she’s not writing she can be found gallivanting in the woods or galloping around the barn where she works as a horse trainer and exercise rider.

AN AFFAIR OF POISONS is her debut novel.

Review of An Affair of Poisons

Review (4 Stars): An Affair of Poisons was a exciting historical tale that kept me on the edge of my seat.  Mirabelle had a passion of alchemy and unwittingly helped her mother poison the King Louis XIV so her mother’s Shadow Society could gain power to rule over France.  When she learns what she has done, Mirabelle looks for a way to use her skills and fix the damage that she helped to cause.  Her only hope is a young man, who is one of the remaining heirs to the throne and stop the people that are willing to do whatever it takes to hold on to power.

This was a great story and I loved spending this story in this historical time period. Mirabelle was a very intelligent young woman who wanted to hang on to the memories of her father by following in his alchemy footsteps.  By doing this, she ended up being manipulated by the people that she trusted the most and I was amazed at the things she was willing to do to make things right.  This book was very entertaining and I’m looking forward to reading more from this talented author.

One Response to “Blog Tour & Giveaway: An Affair of Poisons by Addie Thorley”