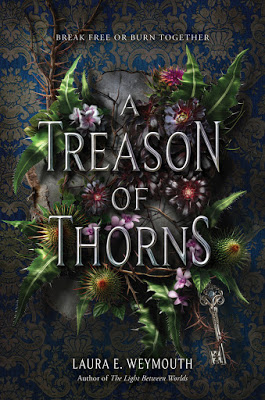 A Treason of Thorns

Synopsis:
Violet Sterling has spent the last seven years in exile, longing to return to Burleigh House. One of the six great houses of England, Burleigh’s magic always kept the countryside well. And as a child, this magic kept Violet happy, draping her in flowers while she slept, fashioning secret hiding places for her, and lighting fires on the coldest nights to keep her warm.
Everything shattered, though, when her father committed high treason trying to free Burleigh from the king’s oppressive control. He was killed, and Vi was forced into hiding.
When she’s given a chance to go back, she discovers Burleigh has run wild with grief. Vines and briars are crumbling the walls. Magic that once enriched the surrounding countryside has turned dark and deadly, twisting lush blooms into thorns, poisoning livestock and destroying crops. Burleigh’s very soul is crying out in pain.
Vi would do anything to help, and soon she finds herself walking the same deadly path as her father all those years before. Vi must decide how far she’s willing to go to save her house—before her house destroys everything she’s ever known.
Content warnings are available via the author’s website.

You’re meant to be a Caretaker, Vi, Papa’s voice says in my head.  And a Caretaker always puts her House first.

My first thought was to run out with the rolling pin and beat the priest over the head with it, if need be.

Power is a seductive thing, Violet. 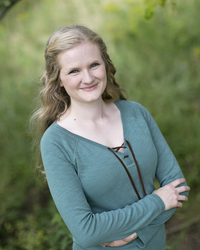 Laura Weymouth is a Canadian living in exile in America, and the sixth consecutive generation of her family to immigrate from one country to another. Born and raised in the Niagara region of Ontario, she now lives at the edge of the woods in western New York, along with her husband, two wild-hearted daughters, a spoiled cat, an old soul of a dog, and an indeterminate number of chickens. She is represented by the inimitable Lauren Spieller of TriadaUS.

Review of A Treason Of Thorns

Review (5 Stars):  This book was absolutely amazing and I just couldn’t put it down.  Violet and her father are from a long line of caretakers of Great Houses in England. Burleigh House has been in their care and after her dad is punished for trying to free the house from its magical bindings, Vi comes home to repair the house.  She has one month to fix the house and harness its power without the magical caretaker key or the house will be burned to the ground.  To what extent will Vi go to save the house that she was destined to care for?

I LOVED this book!  Vi was a great character and I followed along with her as she tried to piece together where the deed for the Burleigh House was so she could save it.  I loved learning about all these magical houses and the power that Vi worked to help heal the Burleigh House’s pain.  Wyn was such a mystery to me as to why he stayed with her father when he was banished to the house and why he could help Vi with the power that the house harnessed.  Such a magical story and I finished it in one sitting.  Can’t wait to read what is next from this talented author.