Welcome to my tour stop for A Batter of Life and Death by Ellie Alexander! This is the second book in the Bakeshop Mystery series.

The tour runs July 6-17 with reviews, interviews, guest posts and excerpts. Check out the tour page for the full schedule.

Welcome to Torte–a small-town family bakeshop where the coffee is hot, the muffins are fresh, and the cakes are definitely to die for…

It’s autumn in Ashland, Oregon–’tis the season for a spiced hot apple cider with a serving (or two) of Torte’s famous peach cobbler. It’s also the perfect time for Jules Capshaw to promote her family’s beloved bake shop by competing in The Pastry Channel’s reality show, Take the Cake. The prize is $25,000. But as Jules quickly learns, some people would kill for that kind of dough. Literally.

Then, just as Jules dusts off her Bavarian Chocolate Cake recipe and cinches up her apron, the corpse of a fellow contestant is discovered–death by buttercream. What began as a fun, tasteful televised adventure has morphed into something of a true-crime detective show for Jules and everybody else on set. Who could have killed Chef Marco, and why? Can Jules sift out the killer before someone else gets burned?

Goodreads | Amazon |  B&N | Indiebound
————————————
About the Author:
Ellie Alexander is a Pacific Northwest native who spends ample time testing pastry recipes in her home kitchen or at one of the many famed coffeehouses nearby. When she’s not coated in flour, you’ll find her outside exploring hiking trails and trying to burn off calories consumed in the name of research. Follow her on Facebook or Twitter to learn more.
Twitter | Facebook
Review of A Batter Of Life and Death
Review (4.5 Stars): Ellie Alexander is one of my favorite mystery authors after reading her second book, A Batter of Life and Death.  Torte has been chosen to help promote the reality show, Take the Cake, and Jules finds herself wrangled in as a contestant competing for the grand prize.  After Jules meets her eccentric fellow contestants, she discovers the body of Chef Marco face down in a vat of frosting and she is involved in another murder mystery yet again.
I have to say that this story was entertaining from beginning to end and I found myself trying to figure out the killer right along with Jules.  I enjoyed learning about reality television and I could tell that Jules wasn’t happy about having to compete in the competition when all she wanted to do was help promote Torte.  A Batter of Life and Death was a charming and energetic mystery that will have you craving one of Jules culinary creations.  I love culinary mysteries and this series is an absolute winner.  Can’t wait to read the next delicious book in the series. 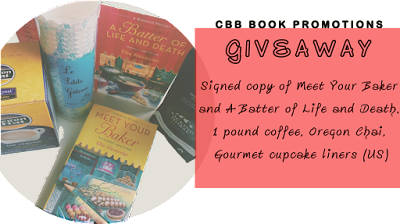 Signed copy of Meet Your Baker and A Batter of Life and Death, 1 pound coffee, Oregon Chai, Gourmet cupcake liners (US)

2 Responses to “Blog Tour & Giveaway: A Batter Of Life And Death by Ellie Alexander”