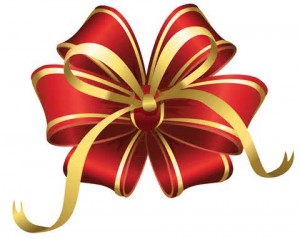 On the ninth day of Christmas Moonlight Rendezvous gave to me…three excerpts from holiday novels and an Amazon giftcard giveaway. Read on for some Christmas cheer with romantic snippets from authors Cindy Kirk, Tracy Brogan and Jamie Beck. Happy Holidays! 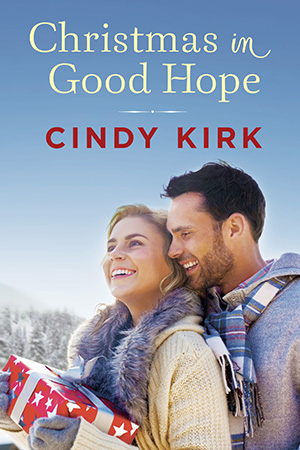 Christmas in Good Hope by Cindy Kirk
“You’re an amazing woman, Ami Bloom.”
“You’re right.” Her bright smile flashed. “I am.”
He laughed.
Her laughter soon mingled with his.
Then their eyes met. The laughter died in his throat and his heart became a swift, hard beat.
He reached out for her and felt her arms encircle his neck. She was so lovely. Did she have any idea the power she had over him?
The feel of her soft curves had Beck forgetting his resolve to keep it all business between them. Just this once he would stop thinking and open himself to the moment, to her. He shifted, gathered her closer still, and kissed her temple.
When she gave a pleasure-filled sigh and lifted her face, he lowered his mouth to hers and found it as soft and sweet as he’d imagined.
The kiss started out gentle and tender but quickly morphed into something more, something that felt … life altering. When her fingers slid into his hair and she began to kiss him back with equal enthusiasm, Beck knew he was in over his head. 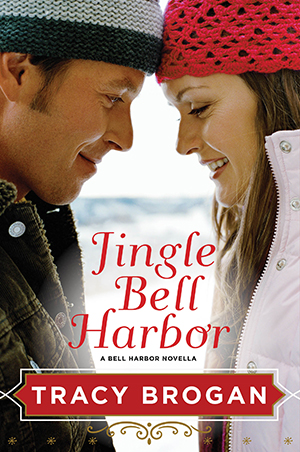 Jingle Bell Harbor by Tracy Brogan
He cupped my face with both hands and traced one thumb over my bottom lip, a soft, slow motion as he stared at my mouth for an eternity. And then, at last, he leaned in and kissed me. Warm, delicious perfection. Pressure and insistence in just the right measure. I’d told Drew he’d been my first real kiss at fourteen. Now I realized I hadn’t truly had my first real kiss, because this was it. I felt it from my lips all the way down to my toes and past every detour in between.
I wound my hand around the back of his neck, needing him closer, and closer still. I hadn’t underestimated just how soft that hair of his was, but I had, remarkably, underestimated my body’s instantaneous reaction to his touch. It was electric. I gave myself up to the moment. I’d earned it, this indulgence. Because I was on vacation, and Drew Hampton just might have superpowers after all.
Arms tangling, heads tilting, pressure building. The kiss ended far too soon, but we stayed close, forehead to forehead. Breathy. Sizzling. Anticipating.
“I’ve waited a very long time for a chance to do that again,” he said, his breath a caress against my cheek.
I tugged off my scarf in a hasty motion. “In that case, we should make up for lost time,” I said. And then I kissed him again. And again, and again. 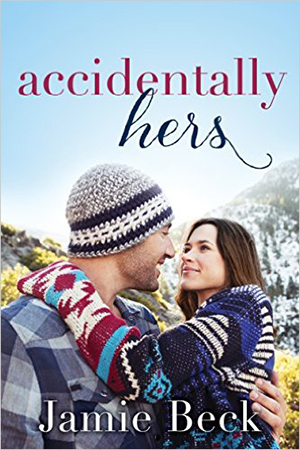 Accidentally Hers by Jamie Beck

“I like you. I like you a lot.”
Heat shot up her arm and spread throughout her chest as his thumb brushed against the backof her hand. When she panicked and tried to pull away, he gripped her hand tighter. “Grey?”
He was staring at her as his other hand brushed back her hair. His touch set off a spark ofenergy that pulsed throughout the room. They both held their breath for a second, eyes locked on each other.
“Screw it,” he muttered before pulling her into a powerful kiss—one she felt down to her toes the instant his hot mouth claimed hers. A low rumble resonated in his chest as he tried to get closer to her despite their awkward positions in the chairs.
For several exhilarating seconds, she allowed herself to be swept away by the taste and smellof him. By the commanding way his tongue tangoed with hers. By the rising temperature in the room and shivery sensations overwhelming her entire body as he buried his hands in her hair.
Kissing Grey was every bit as hot as she’d imagined, and that heat shot straight through her abdomen and in between her legs.
One of his hands ran down her neck and back, pulling her closer. His chest heaved. Low sounds rumbled deep in the back of his throat as he got carried away and took her right along for the ride, crushing her to him.
Weeks and weeks of pent-up desire burst forth, causing her resolve to falter. She dug her hands into his thick, wavy hair, kissing him as she’d done so many times in her dreams. Then danger signs flashed in her mind, causing her to exert gentle pressure against his chest. “Wait.”
He kept his forehead pressed to hers, allowing his breathing to slow down. He held her there, cupping her neck, his thumbs gently rubbing her jaw. “Sorry. That wasn’t planned . . . or particularly gentle.”

As assistant buyer for the world’s second-largest Christmas store, Kelsey Parker feels like a holiday harlot. She’s contractually obligated to promote the yuletide season. All. Year. Long. And it’s taking a toll on her spirit. But when her clueless, self-absorbed boyfriend goes on their long-anticipated romantic vacation—without her!—Kelsey is beyond disappointed to find herself tromping through the Bell Harbor snow instead of lounging on a tropical beach.

Drew Hampton is considered quite a catch among the Bell Harbor bachelorettes, but when his high school dream girl, Kelsey Parker, shows up at his grandfather’s Christmas tree lot complaining about her love life, he decides it’s long past time to get her under the mistletoe himself.

As things heat up between the two, a surprise visitor arrives, making Kelsey an offer she can’t quite believe. Now she must decide what matters most, and she just may discover the key to her happiness.

Amaryllis “Ami” Bloom’s cheerful smile greets everyone in Good Hope, Wisconsin. But her merry facade hides a dark secret she won’t ever forget. Still, she throws herself into celebrating Christmas—and convinces her handsome, and stubborn, new neighbor to join her.

Beckett Cross, however, is determined not to celebrate the holidays. He moved to Good Hope to leave behind reminders of how he’d had it all…and lost everything. But it’s hard to resist adorable Ami, the designated keeper of the small town’s holiday traditions, when she asks for help with the Twelve Nights celebrations. And Ami has a hard time resisting Beck’s soft Southern drawl and gentle eyes. Will a Christmas miracle give them a second chance at love and the hope to heal both of their hearts for good?

Accidentally Hers by Jamie Beck

When ruggedly sexy backcountry guide Grey Lowell moves to Sterling Canyon, Colorado, after buying the ski-expedition company Backtrax, his plans don’t include romance. Still, it’s fun to look—especially across a crowded restaurant at a beauty he dubs “Bambi.” But all his plans change later that night when he’s injured by a drunk driver.

Physical therapist Avery Randall is shocked to learn that Grey’s the man her brother struck with his car, and even more stunned when he arrives at the clinic expecting her help. Despite her reservations and Grey’s silly new nickname for her, Avery agrees to work with him, and passion begins to simmer. Yet with his livelihood at stake, Grey must make tough decisions that could hurt Avery and her family. Before long, Avery’s loyalties are tested, and the choices she and Grey each make may cost them their chance at lasting love.