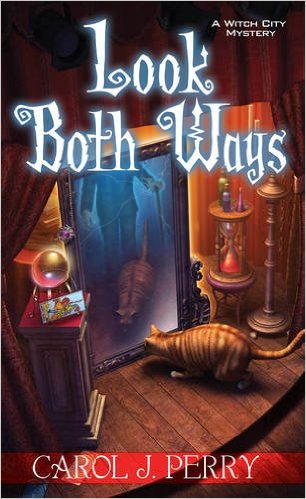 In Salem, Massachusetts, there are secret everywhere–even in the furniture. .

When Lee Barrett spots the same style oak bureau she once had as a child on the WICH-TV show, Shopping Salem, she rushes to the antiques shop and buys the piece. Just like the beloved bureau she lost in a fire, this one has secret compartments. It also comes with an intriguing history–it was purchased in an estate sale from a home where a famous local murder took place.

The day after the bureau is delivered, Lee returns to the antiques shop and finds the owner dead. The police suspect the shop owner’s unscrupulous business partner, but Lee wonders if the murder is connected to her new furniture. At least part of the answer may be revealed through a mirror in the bureau, tarnished and blackened, allowing Lee to tap into her psychic visions. Using this bureau of investigation, Lee may be able to furnish her policeman beau with the evidence needed to catch the killer–before the next one to be shut up is her. . . 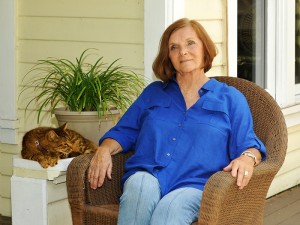 Carol J. Perry knew as a child that she wanted to be a writer. A voracious reader, whose list for Santa consisted mostly of  book titles, she never lost sight of that goal. While living in Florida, Carol was on assignment for Southern Travel Magazine, preparing an article on the world’s tallest sand castle which was being built near her home. That combination  of events inspired her first young adult novel, Sand Castle Summer. That book was soon followed by half a dozen more. Always an avid reader of mysteries, Carol Perry’s debut mystery novel is set in Salem and involves a mysterious cat, several witches and some strange Halloween happenings. Appropriately enough, this Salem-born author celebrates her birthday on Halloween eve!

Review of Look Both Ways

Review (4.25 Stars):  This is the third book in the Witch City mystery series and I fell in love with these characters.  Lee was a fun, free-spirited character that I instantly connected with and I loved the paranormal aspect of this mystery.  In this story, Lee finds an exact replica of her beloved childhood bureau that she lost in a fire and learns that this lovely piece of furniture has an interesting history.  When the owner of the antique shop is found dead, Lee must find the killer before she becomes the next murder victim.

This is such an entertaining series and I was hooked from the very first page and I stayed up most of the night trying to figure out the clues.  I have to say that this is one of my favorite series right now and I’m looking forward to reading book four from Ms. Perry.

2 Responses to “Blog Tour and Giveaway: Look Both Ways by Carol J. Perry”